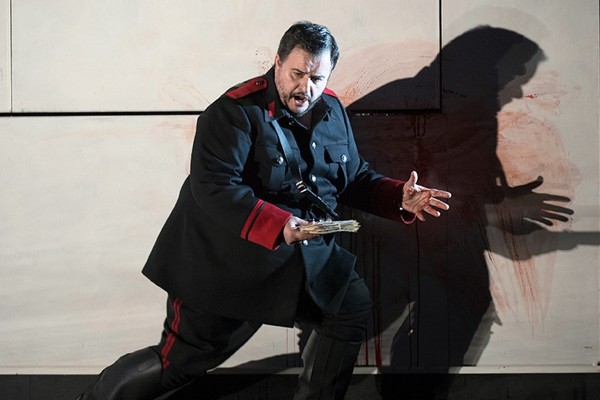 As the adversary seeking the death of Alvaro, the Spanish baritone Luis Cansino sang with good variety of well-modulated tone as he portrayed the malevolence and hate of the Calatrava clan for Don Alvaro and his lineage.
Robert J. Farr “Seen & Heard International"

Luis Cansino’s characterisation of the brother drew the audience into the turmoil of someone duty bound to avenge his father’s death. He sang with a spectacular depth of passion throughout.
Rhys Scrivener “Carn’s Theatre Passion”

The Spanish baritone Luis Cansino is a real find. His singing was riveting: polished, expressive, strong but never unduly overpowering. His big aria was miraculous: pure enchantment!
Roderic Dunnett “Behind the Arras”

Opposite him is Luis Cansino, a great voice with much drama and colouring for one of Verdi’s most ruthless characters.
Alexander Campbell “Classical Source”

Luis Cansino conveyed the stubbornness of di Vargas incredibly well, and through the way he presented himself onstage, the character’s determination to maintain his family loyalty was clear. His pursuit of Alvaro at times felt like a Mafia-esque vendetta, as he was committed to avenge his father.
Matt Dawson “Redbrick. Me”

Luis Cansino makes a wonderful, implacable Carlo; Without listening and without compassion, it embodies the fascist Italy / Spain that was suggested with joy of war.
Steph Powe “Independent”

I cannot imagine Don Carlo more beautifully sung than by Luis Cansino, he brought an ideal sense of Verdian line to the role and the scenes with Gwyn Hughes Jones' Don Alvaro were some of the finest late Verdi singing I have heard in a long time.
Robert Hugill “Planet Hugill”

There are no complaints, at all, of the dramatic intensity or the weight and vocal quality of Carlo de Luis Cansino. Their commitment is immense.
Richard Morrison “The Times”

Luis Cansino, as Carlo, offered a shapely and musical delivery. Their gravely beautifull duet "Solemne in quest'ora" is a highlight of the evening.
Rupert Christiansen “The Telegraph”

Exclusivity in Spain & Portugal
Other countries