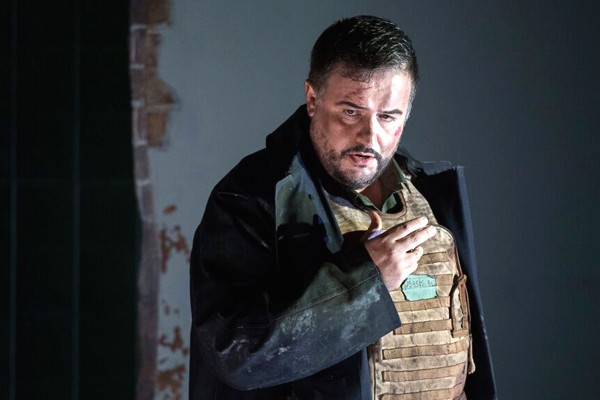 Luis Cansino as Macbeth, with dark voice was growing in dignity and vocal greatness throughout the night, heading towards its violent conclusion: that was of heroic singing.
Richard Bratby ("Birmingham Post")

Luis Cansino as Macbeth, was particularly revealing in turn, inhabiting the role dramatically and vocally with great force and considerable beauty of tone.
Mel Cooper ("Plays to See")

Luis Cansino interpreted a Macbeth, at first, unsure of himself and reluctant to take the role  of King prophesied for him. He exuded a confident voice that guided him through the  development of the role of  Macbeth, to accept their fate, first, to rule, and then to be defeated.
Curtis Rogers ("Classical Source")

Luis Cansino as Macbeth grows in menace and stage presence throughout the opera. He presents, for the first time as a freedom fighter, who lives in the woods with a bullet-proof vest and trained to the business of killing. This staging, suggests a soldier with violence clean, free of guilt, and that he has done nothing to prepare for the new style, blood-leeting,  which is about to adopt. He is in charge of the artists with the sensational voices.
Andrew Batten-Foster ("B 24/7")

With well controlled  vocality, at all times, Luis Cansino'sMacbeth, offered occasionally, the brilliant victorious soldier and man consumed by ambition to become King. This does not prevent that there are many  moments in which the delivery and the singing of Luis Cansino were a joy to listen to.
Gerry Parker ("The Bristol Post")

The production is saved  by some fine singers, mainly from Luis Cansino in the title role, baritone of an honest instrument, dressed as portly squaddie.
Alexandra Coghlan ("The Spectator")

Spanish baritone Luis Cansino sang with a convincing sense of Verdi’s idiom. He was at his best in the opera’s closing scene, facing up to inevitability of defeat and death.
Glyn Pursglove ("Senn & Heard International")

The baritone Luis Cansino is as sturdy in the title role as the Birman Oak, unsettled by the witches’ prophecy but in thrall to his power-hungry wife.
Rebecca Franks ("The Times")

In the title role, Luis Cansino his baritone has a Verdian nobility of line.
Rian Evans ("The Guardian")

Luis Cansino delivers a rigorous and considered performance as the title role, increasingly tormented as his reign disintegrates.
Emily Pearce ("The Reviews Hub")

Exclusivity in Spain and Portugal
Other countries, except Italy and Australia

Exclusivity in Italy and Australia
Other countries, except Spain and Portugal

Other countries, except Spain, Portugal, Italy and Australia